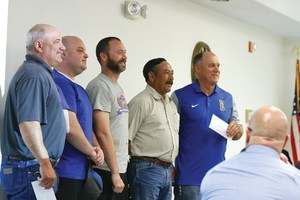 For some, making sure the next generation will have the same opportunities as they did is a goal in life. On Wednesday, April 11, the Exeter alumni football team took a step toward their goal at the Exeter Unified School District Board meeting where they presented $3,000 for the high school football team.
“This has been one of my dreams for a long time to give back to this program,” Bob Martinez said.
The first actions to make Martinez’s desire to give back began in 2000 when he and a few others tried to start back up an alumni football game with Woodlake High School. The main goal of the game was to raise funds. The game was brought back two years ago. Even though Martinez had to wait longer than expected, the group’s goal never changed.
Martinez, along with help from Josh Werley, Kevin Step, Travis Choat, Fabian Anguiano, and A.J. Hovis, hoped to accomplish three goals with their efforts: the first being to support the high school team. All the members of the alumni team had competed for the Monarchs as students. All of them have memories of the generosity of others when they played.
The second goal is to support the youth programs. Martinez was a product of the Exeter Pop Warner program. After high school, he coached the community’s youth for 22 years.
As a coach, he saw how the program was run. He remembers how very little funding his program received, which forced kids to buy some of their own equipment each year.
But Martinez also saw a great number of the youth football players go on to play in high school. Now he sees those former players as productive members of society, which is another reason why he chose to support the youth program as well.
Finally, the team tries to remember the foundation on which the various programs are built. At their annual dinner each year, they honor a former coach who was influential in shaping their lives.
To date, the team has given back a total of $5,000 to a variety of organizations around high school and youth football. All the funds were raised with two dinners and two football games.
For anyone who would like to further help with the team’s efforts, there is still time. Their annual dinner will take place on Saturday, April 28 at the Exeter Veterans Memorial Building, 324 N. Kaweah Ave. in Exeter. The dinner is $25 a person. Social hour begins at 6 p.m. with dinner served at 7 p.m. This year, Danny Boland and Doyce Lovell will be honored.
“Without the support of the community and high school, we could not do what we are doing,” Martinez said.
http://www.thesungazette.com/article/sports/2018/04/18/exeter-alumni-football-team-presents-school-district-with-3k-for-the-high-school-football-program/ Source: The Sun Gazette
Print