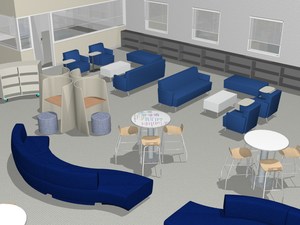 Exeter Unified is continuing to change the way education looks, and also how it feels.

Last November, Exeter Unified School District board members voted to redesign 18 classrooms into 21st Century learning environments as part of a pilot project to see how teachers used space differently to improve student engagement.
On April 11, board members authorized staff unanimously to purchase $160,000 in modern furniture to transform the Exeter Union High School Library into something resembling more of a bookstore lounge, coffee shop or college student union.
“We have an old-fashioned library and it is not desirable for students,” said deputy superintendent Donya Wheeler. “We want that space to be much more usable for students as a gathering place for individual study and group projects.”
Bookshelves from the interior of the library will be removed and relocated to a corner of the library. This new, open space will be filled with S-shaped couches in Monarch blue, high top tables and stools on castors, testing pods, U-shaped couches and seating with footrests. The rolling, high top tables will have laminate surfaces for students to right on with special pens. The testing pods have a U-shaped partition with an attached desk tray that can be slid around the room for privacy. On one side of the open area will be a collection of more traditional looking couches and armchairs with work tables and trays. The furniture will have outlets and USB ports for students to plug in laptops, tablets and mobile phones.
Bookcases will still line the lower portion of the outer walls.
In addition to books, the corner rooms of the library will also be used as media rooms, green rooms, and office space. The media rooms include four media tables, each with seven seats and adjustable monitors, where students can work on group projects displayed on the screen. The green room will offer cameras and a green screen for students to create and edit video for projects and assignments.
Students will be able to check out tablets and laptops to use in the library that can also be plugged into the various stations. In order to provide more security, students will enter from the eastern entrance (facing onto campus) rather than from the western entrance (facing off campus).
“It’s a total transformation of the library into something that students will want to spend time in,” Wheeler said.
EUSD also moved into phase II of its classroom redesign. At its April meeting, the EUSD board authorized unanimously $168,979 to convert 18 classrooms from traditional to more flexible seating. At the center of the classrooms are kidney-shaped desks on casters that could be moved around the room to form a circle, separate distracting classmates or form smaller groups for projects. All of the desks are adjustable between stool and chair height allowing students to sit or stand while they work. Desk tops are made for dry erase markers. The tops of the longer more rectangular desks could be turned on their side, creating a smaller whiteboard that could be moved around the room. Students could choose to sit in a bean bag, stool, plush block or more traditional chair and even switch them out if they need to change positions while reading or composing on their laptops. Nearly every inch of wall space within reach of a teacher or student will be covered with whiteboard material to create “360-degree” visual learning.
Wheeler said the cost is about $9,387 per classroom and will include four classrooms at Lincoln and Rocky Hill elementary schools, four at EUHS, five at Wilson Middle School and one at Kaweah High School. The classrooms will be at every grade level.
“The main difference between these and the 18 in phase I are that we included a rolling podium/desk for the teacher,” Wheeler said. “Teachers found that they didn’t need a desk to hold files and paper anymore because most of that can be stored electronically.”
The district piloted the idea of flexible classrooms by converting 18 at each school site in October. The cost, $300,000, was significantly higher because the district signed an agreement with a furniture company to get a better deal. Phase II classrooms, as well as the EUHS library, are being funded through the district’s Local Control Accountability Plan (LCAP), a three-year plan that outlines how the district will spend its money connected to one of eight state priorities in areas of Conditions of Learning, Student Outcomes, and Parent and Pupil Engagement.
“Our plan is to redesign every classroom in the district over the next few years,” Wheeler said.
http://www.thesungazette.com/article/news/2018/04/18/exeter-unified-redesigns-euhs-library-classrooms-at-all-levels-to-be-21st-century-learning-environments/ Source: The Sun Gazette
Print