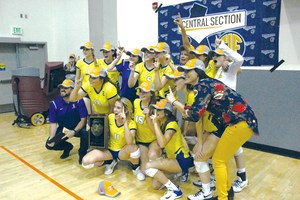 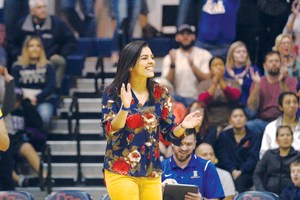 A measurement of how good coaches are is how much success they have. Not how long they have been at it. For Monarchs head coach Samantha Hilvers success seems to come naturally. Now she can add a state award to her growing list of accolades.
On Tuesday, April 10, she was notified that the California Coaches Association had awarded her State Volleyball Coach of the Year.
“It just blows me away that I would even be considered for this award,” Hilvers said. “A lot of the time it is the girls’ play, and how well they conduct themselves on the court that draws attention to us.”
Involved in coaching for the last four years, Hilvers just completed the second year at her first head varsity position last fall. In that short time, she has reinvigorated a program which is used to winning. Since 2016, she has brought home more titles than the last two coaches combined. In her first season, she led Exeter to their first league title, a co-Central Sequoia Championship with Central Valley Christian, in eight years. Later that same season, they made an appearance in Division II CIF Valley Championship. It was Exeter’s first in the same time span. While it resulted in a 3-0 loss to Garces, a unique confidence was revealed for the team.
This past season Hilvers proved the style of volleyball she taught was more than a one-hit wonder. Exeter successfully defended their CSL title, winning it outright, and advanced to their second straight section title game. Having to go through another south valley private school, Bakersfield Christian, Hilvers, and the Monarchs got a sense of validation when they won 3-2.
“I am still fairly young so there were these times of self-doubt,” Hilvers said. “The win gave us some affirmation that this team is the real deal.”
Hilvers played her high school volleyball for the Cavaliers of CVC during the early 2000s, a time when winning section titles and beyond was a given for the program. Although, she developed a winning attitude the titles came with such ease she didn’t fully understand what was being accomplished. When the Monarchs won their first section title in nine years Hilvers realized the magnitude of what she had been accustomed to all along.
“I knew how bad we wanted this title and how hard we had worked for it,” Hilvers said.
Hilvers went on to attend and compete at Westmont College with every intention of coaching one day. Those intentions took a detour, but eventually came around. She began as an assistant and junior varsity coach at Clovis West in 2014. It was there she began to become aware of the talent Exeter had coming up. Not only did a few Monarch players, like Madelyn Sweepe, try out for the local club team in Clovis, but Exeter’s junior varsity team went toe-to-toe with the Golden Eagles.
Strong teams are something Hilvers always remembered Exeter having. During her high school days, it was commonly discussed which team, either Exeter or CVC, would be the best in Tulare County. Being in separate divisions, however, it was hard to accurately decide on one school or the other. It often came down to the rare meetings in tournaments.
Having seen a resurgence of talent Hilvers thought it was time to come closer to home. Then when the position opened up she did not hesitate. Since making the decision she has also won the CSL Coach of the Year award.
With the program back to its winning ways Hilvers is excited to see what the future holds. She will have to do it without two of her best middle hitters, and both setters. Hilvers admits replacing the setters will be the most difficult.
“Setters are like the quarterback, they run your offense,” Hilvers said.
While some positions will be left vacant the Monarchs do return outside-hitter Corinne Acosta. In 2017 Acosta scored 343 kills.
“It is nice that I don’t have to graduate all six of my top players on the court,” Hilvers said.
http://www.thesungazette.com/article/news/2018/04/18/exeters-samantha-hilvers-named-states-top-high-school-volleyball-coach/ Source: The Sun Gazette
Print