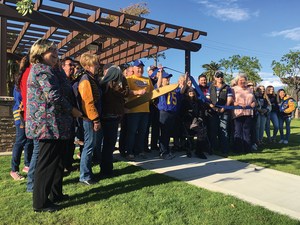 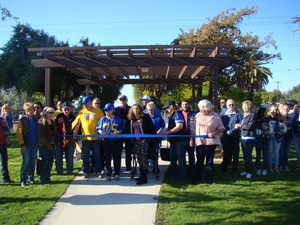 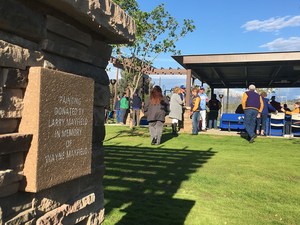 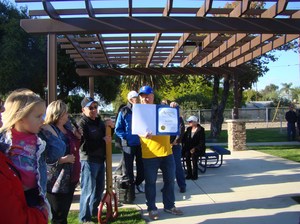 Members of the Exeter Union High School Alumni Association have built an outdoor throne room befitting of their Monarch heritage. On April 19, the Alumni Association dedicated the city’s newest park that was funded, envisioned, designed and constructed by Monarchs.
Dean Sutton, president of both the alumni foundation and the Exeter Unified School District board of trustees, and David Nielsen, longtime alumnus and community leader, shared the ceremonial scissor honors at the ribbon cutting for Alumni Park, located at the corner of San Juan and Buena Vista avenues. The two were surrounded by local business leaders, civically minded community members, educators, doctors, lawyers and, most importantly, they were alumni.
“This is something that will benefit the entire community and memorialize our alumni and what they mean to our community,” Sutton said. “It’s nice to see so many turn out and wearing their blue and gold.”
Sutton said the project was a long-time coming. He said $50,000 was raised by alumni more than 10 years ago to build something in honor of generations of Monarchs who have graduated from the school over the last 108 years. The problem was that the foundation had more money than space.
“We had talked about a bench with a nice arbor but we would have had to make the bench out of gold to use up the money,” Sutton quipped. “We needed a larger project and something that the entire community could use.”
Former Exeter schools superintendent and EUHS alumna Renee Whitson said the idea to dedicate a location for the high school’s alumni began around 2008 when EUHS began discussing the high school’s centennial. Whitson said the project was originally discussed as a courthouse-style square outside of the library but construction issues delayed the project. Over time, the Alumni Foundation’s board changed hands, key people moved on or passed on and the project fell by the wayside despite having significant funding. When the idea of dedicating a portion of the new district office, Whitson, who spearheaded the effort to purchase the former Memorial Hospital complex, said it was a true homecoming for a property where many of the alumni were born.
“The alumni now have a place to come home,” said Whitson. “This project is a way to hold on to where we were born and has been given new life. It’s really come full circle.”
Current Superintendent Tim Hire credited Whitson and the Alumni Foundation for raising the money and then reviving the project, but it was Hire who urged the school board to give up the southern edge of the former hospital complex for the park. Hire said he has already seen staff at the district office spend time there and EUHS students enjoy lunch there, as it is a short walk from the high school. He said the park will be temporarily closed at night as school buses will be parked there until the district finishes remodeling its bus yard with a compressed natural gas fueling station.
“This is for the community to enjoy their time here and I hope they use it regularly,” Hire said.
Everyone agreed the real hero of the project was another EUHS alumnus, Gabe Espinola, director of maintenance, operations and transportation for the district. Espinola said the project began four years ago when the district razed the blighted bungalows along the railroad tracks. After grading the property in the fall, Espinola said the park light poles were antiques saved from a remodel at Rocky Hill Elementary school but adjusted for brighter, more efficient LED lights. The garbage receptacles are former downtown Exeter bins recycled and painted tan to match the park. They also laid the concrete for the walking path that is one-seventh of a mile around the park. Gabe and his school district crew built the center gazebo while the other two were built by contractors, allowing the district total control over design. Espinola, along with David and Willie Fairchild, Phil Stewart and Joe Vain, did all of the electrical wiring and labor donated by the district.
“We did a lot of work on the weekends but I couldn’t tell you how many hours,” Espinola said. “It’s too many to keep track of.”
All of the brickwork was done by Brian Berry of Foothill Masonry. The initial $50,000 in alumni founding was raised by alumni individuals and their families. Berry built a brick wall on the northern edge of the park where plaques commemorating the founding donors are displayed. Former alumni foundation president David Nielsen helped coordinate subcontractors on the project that Espinola “made magically beautiful.” He said he envisions the park as the perfect spot for alumni barbecues, family gatherings, community events, and the best spot in Exeter to watch the fireworks show next door at Dobson Field.
“It turned this desolate corner into something beautiful,” Nielsen said. “I know what kind of community effort it took to make this happen and it turned out better than expected.”
There were even a few current Monarchs who had a hand in the park’s construction. A large barbecue pit at the main arbor was built by EUHS FFA leaders Skylar Hornung and Cody Dragt. A bench in front of the founders’ wall was on display by another FFAer Alex McEwen. McEwen said he is building three of the metal benches as his Eagle Scout project, the highest rank in Boy Scouts of America. He said the benches will be powder coated in Monarch blue before being bolted into the park.
There are plenty of spots left for alumni to purchase bricks on which to etch their names and their class year. Bill Nielsen, the 2017 EUHS Alumni of the Year, said he will put in a new order for every 100 bricks sold. Small bricks, which include three lines, are $75 and large bricks, which include six lines, are $150. New bricks will be inset into the brick base of each pillar of three arbors.
http://www.thesungazette.com/article/news/2018/04/25/alumni-park-ribbon-cutting-commemorates-generations-of-euhs-graduates-and-how-they-give-back-to-the-community/ Source: The Sun Gazette; Exeter Chamber of Commerce
Print