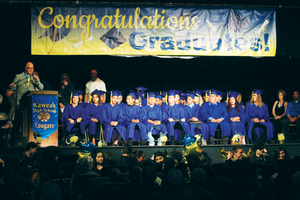 Kaweah High School senior Jose Mejia thought his senior year was supposed to be the highlight of his school career. Then a move to a new school threatened to change all that.
After falling behind in his classes, Mejia found himself at the continuation high school, a second new school in as many years. But what he found is that it was easier to make new friends and find supportive teachers in the smaller class sizes offered at Kaweah High School. In the end, his new environment helped him persevere and graduate along with 23 of his classmates on May 30 at the Exeter Union High School (EUHS) Auditorium.
“The day we have been waiting for is finally here,” Jose said. “Twelve years of studies, struggles and stress has finally paid off as we anxiously sit here and await the diploma we have earned.”
Jose and his family previously lived in Bakersfield where he had attended schools for the last 10 years. Like most students he grew up with the same classmates who became his best friends, and he was looking forward to spending his high school years with them. But before high school began Jose’s mother, Leticia Mejia, decided to take a new job at Monrovia Nursery outside of Woodlake.
The move was difficult for Jose. During his first semester at Exeter Union High School he often felt overwhelmed. Weighted down by the curriculum of a senior student coupled with feeling like an outsider, Jose quickly fell behind in his studies. The pressure got so bad depression began to set in. Jose began to lose interest and even thought about dropping out and moving back to Bakersfield. He hit his lowest point when after his first semester he was transferred to Kaweah, a school he had heard plenty about none of which was very good.
“There was so much said about this school and how no one cared about anything here,” Jose said.
As Jose began to attend classes he figured out the stories were just rumors. The teachers and faculty did care and pushed students to stay on track in their assignments. One teacher, Joe Hachee, encouraged Jose and his classmates to take the college placement tests. Thanks to the support he received at Kaweah, Jose plans to attend College of the Sequoias next fall. He said he hopes to transfer to a university where he can major in communications or psychology.
“Without Kaweah giving me that push to go to college, I wouldn’t have even thought about going and continuing my education,” Jose said.
The one providing the biggest push for the students to graduate and continue their education was principal Darin Pace. Students at the graduation commented that Pace can be heard everyday on campus giving encouragement to students reminding them that they are stronger than they know. For Pace the biggest joy not only comes from seeing the graduates receive their diplomas but also having developed a strong character.
“There is no one up on this stage tonight who got here the easy way,” Pace said. “Every single person up here has faced adversity in some way and has had to respond with optimism, growth and a belief in themselves.”
The Student of the Year award, went to Jacob Estep. The Pyramid of Success Award went to Ryan Duncan. The Character Award went to Gamaliel Huertas. The Optimist Club Scholarship went to Madalyn Hughes.
http://www.thesungazette.com/article/news/2018/06/06/kaweah-high-school-grad-tells-story-of-moving-to-exeter-falling-behind-before-finding-success/ Source: Patrick Dillon
Print