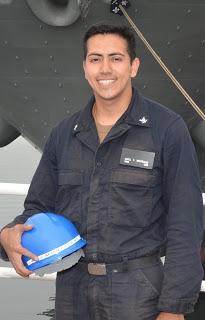 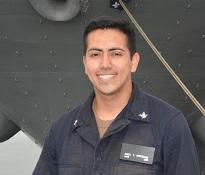 An Exeter, California, native and 2014 Exeter Union High School graduate is serving in the U.S. Navy aboard the amphibious assault ship USS Makin Island. Petty Officer 3rd Class Angel Montejano is a machinist's mate aboard the amphibious assault ship...
Petty Officer 3rd Class Angel Montejano is a machinist's mate aboard the amphibious assault ship operating out of San Diego. A machinist's mate is responsible for the balancing of systems and maintaining air conditioning systems on board the ship.
Montejano credits success in the Navy to many of the lessons learned growing up in Exeter.
“I was taught to always work hard, never give up and to always follow your dreams,” said Montejano. “This has helped me in my military career to rank up easily and to always push forward to get better.”
Makin Island, one of the Navy’s most advanced and largest amphibious ships, is designed to deliver Marines and their equipment where they are needed to support a variety of missions ranging from amphibious assaults to humanitarian relief efforts.
The ship, which resembles a small aircraft carrier, is longer than two football fields at 847 feet, is 106 feet wide and weighs more than 41,000 tons fully loaded. It has gas turbine engines and two variable speed electric motors that can push the ship through the water in excess of 20 knots. It can carry more than 12 helicopters and six fixed-wing aircraft.
Sailors’ jobs are highly varied aboard Makin Island. More than 1,000 men and women make up the ship's crew, which keeps all parts of the ship running smoothly, from handling weaponry to maintaining the engines. An additional 1,700 Marines can be embarked. It is capable of transporting Marines and landing them where they are needed via helicopters, vertical takeoff and landing aircraft and landing craft.
“Makin Island is one of the most advanced warships on the waterfront, but she’s nothing without her crew,” said Capt. David Oden, commanding officer of Makin Island. “They’ve proved themselves time and time again, and their level of professionalism and dedication is second to none.”
These amphibious assault ships project power from the sea serving as the cornerstone of the amphibious ready group. Makin Island was delivered to the Navy in April 2009 and is the first U.S. Navy amphibious assault ship to be equipped with both gas turbines and auxiliary propulsion system instead of steam boilers.
These ships support special operations and expeditionary warfare missions, transporting U.S. Marines from sea to shore through a combination of aircraft and water landing craft. Because of their inherent capabilities, these ships have been and will continue to be called upon to support humanitarian and other contingency missions on short notice.
“I like the new experiences I am gaining on board the Makin Island,” said Montejano. “I am learning new things in the engineering department. It is going to make me well rounded when I am out of the Navy and give me more opportunity in the civilian world.”
Montejano has found many great rewards in the Navy and is particularly proud of making third class petty officer while serving aboard Makin Island.
As a member of one of the U.S. Navy’s most relied-upon assets, Montejano and other Makin Island sailors know they are part of a legacy that will last beyond their lifetimes.
“Serving in the Navy makes me proud to serve the United States,” added Montejano. “I feel like I am giving back to the country.”
https://navyoutreach.blogspot.com/2018/06/exeter-native-serves-on-city-at-sea.html?m=1 Source: Kayla Turnbow, Navy Office of Community Outreach
Print