Exeter Monarchs move on to quarterfinals 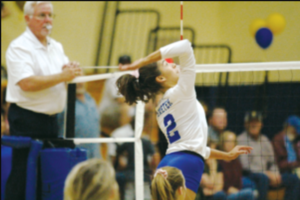 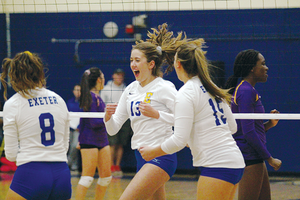 Exeter makes a statement in Division II with a convincing sweep over Lemoore. The road on the upper half of the Division II bracket to the section finals at College of the Sequoias’ Porter Field House must go through Exeter.
The Lemoore Tigers found out just how difficult that road will be on Thursday night, Oct. 25, as the top-seeded Monarchs eliminated them 3-0 (25-15, 25-10, 25-13).
“The girls played really well tonight,” Exeter head coach Samantha Hilvers said. “It is exciting to see them play well right from the very beginning because it is not going to get any easier from here on out.”
The Monarchs (32-10, 12-0) were given some extra motivation to come out and put a complete game together after what happened at the seeding meetings. Exeter’s strength of schedule winning the Central Sequoia League for a third straight year, and not to mention they are the defending champions should have had them down as a unanimous choice for the top seed. However, one coach put the Monarchs down as the No. 11 seed.
“It is always interesting to see how other coaches will rank teams, especially if it’s a team they haven’t played,” Hilvers said. “My girls were very perplexed by that and wanted to make a statement.”
Being that the Monarchs had not faced the Tigers (14-15, 3-7) at all this season it did take them a couple points to find out who they were going to key in on at certain points of the game. All Corinne Acosta needed was a clear lane as she once again led the charge for the Monarchs with 10 kills. She delivered a massive kill late in the first set which brought the Monarchs within one of the set wins, 24-13.
“We are just going to prove everyone wrong by winning valley,” Acosta said.
The Monarchs hitting was just the exclamation point on the night. Katelyn Kirkman once again was everywhere on defense as very few kills were successful. Grace Germaine and Teagan Bryant were on point from the service line combining for nine aces.
Exeter’s desire to win improved their play in the second set which has been the Monarchs weakest set all year long. Mattie Fry went on a 10-point service run after both teams were tied 3-3 which put the Monarchs safely ahead.
In the third set, Exeter continued to roll with Acosta delivering two kills in the final two points for the win. At one point the Monarchs led the Tigers 12-2.
If the Monarchs wish to make it to their third straight section championship they know they must not let off the intensity, especially when they play against the winningest head coach in Exeter’s history. Alana Montgomery won six section championships in the early 2000s and was the last head coach to win back-to-back section titles. Last Tuesday night Montgomery brought her eighth-seeded Redwood Rangers to Exeter to face the Monarchs for the third straight season. Final happened after press time.
“The girls get really excited to play Redwood,” Hilvers said. “They bring a level of excitement that I don’t have to drag out of them.”
http://www.thesungazette.com/article/news/2018/10/31/volleyball-exeter-monarchs-move-on-to-quarterfinals/ Source: The Sun Gazette
Print