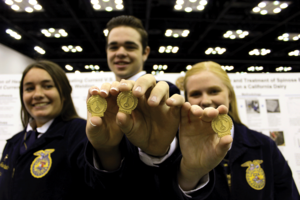 Fourteen students and two advisers from the Exeter FFA Chapter had the opportunity to attend the 91st National FFA Convention in Indianapolis, Indiana during the fourth week of October. As stated by many of the attendees, the experience was unparalleled.
The group included sophomores, juniors, seniors, alumni, and agriculture instructors Dan Crookham and Kevy Mendes. Six of the students competed at the national level for the agriscience and marketing plan competitions. Brianna Pike, Mia McCormick, and Brian Dreyer placed third in the nation for their marketing plan presentation. MaryJane Archuleta-Jensen, Zachary Giovanni, and Grace Jardon all placed fifth in the nation regarding their categories. Jardon explained that the competition was a highlight of the week-long trip in Indianapolis; and studying other agriscience projects was an amazing experience. “My ag teachers, industry mentors, and parents all made it possible for me to compete with my Agriscience project at National Convention.”
Additionally, four Exeter Union High School graduates were awarded the highest degree in the FFA. The National FFA Degree is awarded to fewer than one percent of all members of the organization annually. Cole Dunn, Kaitlyn McFarlan, Austin Robbins, and Chance Smith underwent extensive requirements in order to apply for the prestigious degree. All are currently in college or working full time.
Travel expenses amounted to more than $1000 per student, and Exeter Ag Boosters provided $800 to each of the 14 students who attended the convention. Chapter President Grace Jardon and chapter Vice-President Hayli Limon both agreed that through the generous donations they each received, they were able to more easily make the trip.
The National FFA Convention also featured many exhibits, guest speakers, and even the President of the United States; the first president to speak at the convention since 1991. Moreover, a private Garth Brooks concert was also available to the some 69,000 members who attended from across the U.S. Numerous sessions and workshops were available to the FFA members, a learning opportunity to all. Hayli Limon recalled, “Attending the third session opened my mind to nationwide agriculture, [which] expanded my knowledge of commodities and farming methods that other states use.” Limon also explained that it was fascinating to see the similarities between chapters; and also identify the differences that make each state association unique.
Jardon and her peers were able to bring back newfound knowledge of agriculture, leadership, and the FFA Organization to their chapter. “There are so many people from different backgrounds and it is amazing to see how they are all united in the blue jacket,” she explained.
http://www.thesungazette.com/article/education/2018/11/28/exeter-ffa-among-nations-elite-programs/ Source: Written by Lauren McEwen for The Sun Gazette
Print