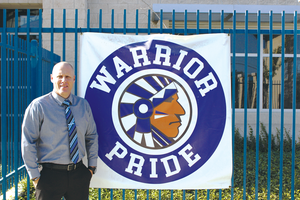 Wilson Middle School had some changes over the summer. On the first day of school, students got to see the newly remolded first three wings of classrooms, and got to meet their new principal.
Stephen Bradley takes over the lead position at the school after spending the past three years as assistant principal.
Bradley got his first teaching job in 2000 after receiving his teaching credential when he was done serving in the army. It was at a community day school with the Burton School District in Porterville. The classroom setting was specifically designed for students who had been expelled or removed from their learning environments for disciplinary reasons. He remained at that position for three years before moving on to teach math at Burton Middle School for one year. It was a month into his second year at Burton Middle when his first opportunity for an administrative position appeared. In early September 2005, the school’s assistant principal stepped down after finding another job. The school then asked Bradley to step in as interim assistant principal. He remained in that position until 2014 when the Burton School District underwent a staffing shake-up.
“I had really found that middle school was where I wanted to be,” Bradley said. “A lot of people hear that and find it kind of crazy that is where [anyone would] want to be. But it was just a good fit for me.”
Bradley began to search for another assistant principal position in 2014, fully understanding that it might be harder to get an administrative job in a district where he hadn’t taught before. At the time, the assistant principal position became open at Wilson Middle School. He applied and got the position and has remained as the assistant principal until this school year.
The first couple weeks for Bradley have been exciting with all the new responsibilities of his new principal position. But he isn’t overwhelmed. Already very familiar with the staff having worked with them for the past three years, and even been in a position to hire some of them Bradley is excited to see how much further the school can go. New professional development strategies have been put in place in order to help the staff get their students ready for tests.
“We have seen so much growth in that regard over the past couple years and to know we are on the cusp of doing great things,” Bradley said.
Bradley is not only excited about the new teaching styles, but also the new learning environments. Rooms along the first three wings of the campus were remolded over the summer to fit a new 21st-century learning environment. Three of the walls 55” television and the fourth is all whiteboard. Nine of the total 12 rooms have adjustable desks as well.
“They are the nicest classrooms I never went to school in,” Bradley said.
http://www.thesungazette.com/article/news/2018/08/29/stephen-bradley-hired-to-first-principal-position-in-exeter-after-18-years-at-burton-school-district/ Source: The Sun Gazette
Print